Angela Merkel the Jewess agent of the International bankers

Jews took over Germany from 1919, after the Versailles Treaty of 1919 when the country was very weak socially, politically, psychologically and militarily, just as they took over Imperial Russia from 1918-21 under the guise of Jewish Bolshevism, funded by New York and London.

Under Weimar Germany (1919--32) the Jews, amounting to no less than 1% of the population, and to an extent greatly mixed ('Mischlinge') continued their consolidation of power within German society, quite quite openly, and especially within the state structures.

Nazi Germany 1933--1945, funded by New York, London and Jewish Capital carried out International Jewish policy which involved a savage war against Jewish Bolshevik Soviet Union. The result was 10 million ethnic Germans dead mostly at the hands of the Jewish Bolshevik Soviet Union, AND 30 million Soviet citizens died at the hands of the Jewish run Nazi Germany.......The International Jews in New York and London were happy; they had accomplished a great deal against two advanced Western societies, with their Jewish cunning and guile.

Since the occupation of Germany from 1945, Jewish control and power over the country is total.

Thus it is no surprise that Angela Dorothea Kasner, a Jewess with clear pro-Israeli policies should emerge as the leader of the country.

One hopes Germany disengages from the illegal Afghan mission, which essentially at its core is a heroin mission for the Anglo-American Bankers in London and New York. I know I do not need expert arguments to convince them it is nothing other than a 'narco-plantation' operation. Is the German military really proud to associate with such a mission? Really? and in the process kill a few Afghan civilians by accident, and then apologize? All it requires is the courage to see the actual facts.

But we have Angela Dorothea Kasner at the helm....and she in line with Israeli Hertzilya security dictates is making the same Jewish noises in unison with Israel; Mossad Sarkozy and Daoud Cameronski PM of the UK.......Israel must be a purely Jewish state, thus multiculturalism has failed in Germany...even though German prosperity to a certain extent was/is built on immigrant labor. The recent financial mess in Germany is the result of Jewish banker greed, related to the International financial market....and poorly planned Jewish run superstate of the EU/Euro union........nothing to do with immigrants.

She gives state of the art submarines to Israel for free.......so much for promoting PEACE, and co-existence in the region.

She goes to Israel and bows to their leaders and apologizes, and brings back new sets of orders for her to carry out within Germany for the Israelis.

She rails against Iran, and the mullah regime there. If we are lucky we may even find "al-Qaeda' cells in Germany at an opportune date and time. 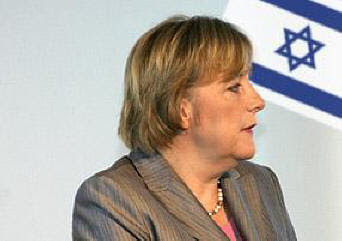 Angela Merkel has a strong Jewish ethnic origins and understands the roots of Zionism. Is that what made her deport the Gypsies? Zionism and the ties to Israel? Putting this question aside, but drawing on her family history and her mother's negative experiences with anti-Semitism, in my view she learned nothing from it, therefore she made it up as she is as racist as she claims the German and Polish people to be with the Jewish.

Angela Merkel is working hard to eliminate anti-Semitism and working even harder on anti-Gypsism, racism against the Roma. Doesn't show much dignity, but she shows the true face of racism and hate. Is that what Zionism is suppose to be about?

Angela Merkel was born Angela Dorothea Kasner in Hamburg on 17. July 1954, the daughter of Horst Kasner, a Lutheran pastor and his wife, Herlind Jentzsch with a Jewish heritage in Poland.

Angela Merkel seem very busy stopping anti-semitism and a good relationship with Israel, meanwhile deporting the Gypsies to Kosovo, where they die. She is deporting those Gypsies, who were born in Germany and have German citizenship. http://www.thelocal.de/society/20100819-29267.html

Angela Merkel cares a lot about the holocaust, so, she called up the Pope on Sunday, and she demanded the Pope to clarify the Vatican's stance on the Holocaust after it lifted the excommunication of a bishop who denies six million Jews were killed. (Not a word about the Gypsies, like they wouldn't exist, as if they didn't die during the holocaust, only Jews died according to Angela Merkel. More then likely Angela Merkel supports the holocaust when it comes to the Gypsies. Angela Merkel initiated the "good and constructive conversation" how to deport, therefore kill the Gypsies and it was characterized by "common deep concern about how to apply the Shoah on the Gypsy people, without being court" says a joint statement with German-born Pope (who also have strong Jewish ethnic origins) Benedict XVI. Shoah is a Hebrew word for the Holocaust. After the Gypsies are killed, 'others' can take their place.

Translations for other languages

Ali.mostaque
I have been under state surveillance and covert harassment in the UK since 1985, by MI-5 and their gullible friends where ever they are found, and overt harassment with surveillance since march of 1996, when I submitted my final year law degree dissertation, 'The relationship between the state, the security services and the law'.